There are specific marks in each era. We may feel that it is more direct. Perhaps the dressing changes in each era. In fact, people, things, and things will have the characteristics of the times, and the fonts are no exception.But how to cross the font to the past?Today, we must talk about how to make the fonts into the nostalgia and retro of the fonts from two aspects: the font change and the font effect. For example, we have been updated from the turntable dial -up dial -up dial to the function phone to the smart phone. From the appearance, it becomes more and more concise. In fact, we can all find similar changes in clothing, food, housing.From the past to the present day, can we summarize some major trends from the inextricable and use it? The picture above is the script, liberal script, script, and regular script in the calligraphy font. It is also the evolution process of calligraphy in order. If you feel unswerving, you can think about the changes in traditional characters to simplified characters.EssenceSo can you just "cross" the "complication" of the text style?Of course not, the following uses several examples to share several specific methods. Many of the variables in the font design are well -founded. For example, we want to design an old -fashioned font in fact. In fact, we can borrow some writing in ancient calligraphy. The most representative of which is the scriptbook.

The scriptures have the pictographic characteristics of the text shape. Although we have lost their practical properties at the moment, we can make a certain optimization according to our own needs to achieve the purpose of ancient times. Generally speaking, you can pay attention to the following three rules:

a.The primary exclusion of low recognition, as shown in the figure, the first word in the figure is difficult to identify for most people;

B.There is a simplification of splicing and simplification, and there is no complete available. This is a certain choice for us, such as the "poem" in the first line in the figure.The change is a bit "over", not in line with our needs, so it is necessary to do a certain simplified treatment;

C.Be good at grasping characteristics. In ancient times, it is not to be copied, but a practical identification. As shown in the figure above, I chose the three words in comparative meaning. According to the few standards mentioned above, it is obvious that the first word will be eliminated, but what I value more is the pen next to the "words" on the left. Of courseDo.

The first step is to outline the structural framework according to the lines above. The last word compared to the previous words is relatively flat. During the process of doing, it is necessary to raise the unity of three words. As mentioned earlier, this method is not completely copied. Let's take a look at where there are some adjustments:

a.The structure on the right of the poem is replaced by the form of simplified characters, maintaining the recognition of the text;

b.The strokes are straightened from the song. For example, the horizontal strokes in the original character have a certain arc. All of them become a straight segment first. This is to make the overall order more reasonable. Of course, there are exceptionsOne vertical pen.

c.Compared with the previous structure, it is taller, especially the last word changes are the most obvious. The height and thinness should be adjusted accordingly according to the meaning of the fonts you made. 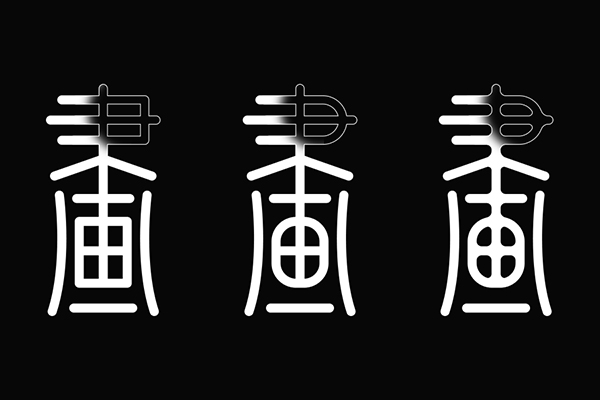 Only the construction of the structure is definitely insufficient, and the details of the details must be indispensable.The strokes of the equal line itself are relatively direct, and some rounded treatment can be added appropriately, which is more in line with the font characteristics of the script.As shown in the figure above, the first word did not do any treatment, and the second pen -drawn corner changed from the original right angle to a rounded corner treatment.The third word has increased the internal rounded corner from the front, so that the pen drawing has a little frustration and more durable. Color and layout are also part of the details. Finally, the dark blue and red seal are used to embellish it. A set of retro but also in line with modern people's aesthetic text design is completed.This method of using ancient and present is very simple, but in addition to the precautions mentioned above, the uniform and orderly configuration of the font is also a vital part. Any word is the case. Second, new use of old characters

Just like the TV series, the scene of the scene can be restored as much as possible, and the films that can be shot can have a stronger sense of substitution. The most direct and effective way we want to design the font of the age is to restore the font characteristics of that era.Similar to the principle of the first way, but it is actually a bit different.Below we traversed from ancient times to modern times, or the word "poetry and painting collection". There are many pictures about old fonts on the Internet. I usually have to be preserved when they meet. Maybe it will be obtained, and it does not matter if it is not stored. Our font school public account will be updated from the old characters collected from time to time, so that everyone will learn for reference. The first step is the extraction of conventional strokes. Due to the age and other factors such as shooting, many font details are blurred and uncertain. Do not change the font details caused by objective factors.Border optimization. Basic strokes can be set up in the next step. In addition to the borrowing structure space characteristics of strokes, we can also refer to the word "three defense common sense" as a whole.The characteristics should be grasped. Finally, as shown above, in fact, the foundation structure is built to the final font. The result you see is only two steps. During the period, there are many fine and repeated adjustments.

This method will be addicted, and there is another group in the word "soda".The process will not be repeated as above, and the results are directly depends on the results. The two old -fashioned strokes selected today are not the most characteristic, and some personality is even more prominent. Everyone may wish to try it to see if it is really as simple as you see. If you usually have no time to design and want to "cross" it quickly, there are also, so the font effect creates a superficial sense of age. It is not very detailed because it is the basic operation of the software. If you share above, you will find that the font design of the age is relatively complicated from the inside and outside. At the same time, you must be good at grasping the characteristics. Several ideas will help everyone sort out. Have you gained a little?